On our latest segment of #TheBreakdown, we sit down with Amapiano’s star producer Busta 929.

We chat to Busta 929 about his brotherly relationship with his frequent collaborator and friend Mpura Mpura. The pair have collaborated on various projects and tracks that have solidified them as a force to be reckoned with.

READ: #NewMusicFridays: Busta 929’S EP, “Undisputed Vol.2”, Is A Celebration Of His Versatility

On the 9th August 2021, Mpura Mpura, Killer Kau and their crew were reported dead after a fatal accident.

n case you missed it, stories and tweets broke that Amapiano artists Mpura Mpura and Killer Kau have reportedly passed on. The story broke out through a series of encrypted tweets from close friends of the Amapiano stars. Initially, it was speculated that it was the Amapiano pioneer Kabza De Small who had passed. However, this rumour was put to rest once Kabza himself was tweeting. 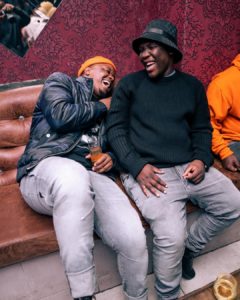 It is still not clear how the stars came to lose their lives, however, tributes have poured in from the entire music and entertainment industry.

You can read more about this story on Zkhiphani.